The long probing for the access point can be optimized away. In addition, it’s not smart to use open access points, so it’s time to measure the cost of security!

Mode 3 in the test sketch specifies all possible Wifi parameters in WiFi.begin() and WiFi.config() and therefore runs much faster: 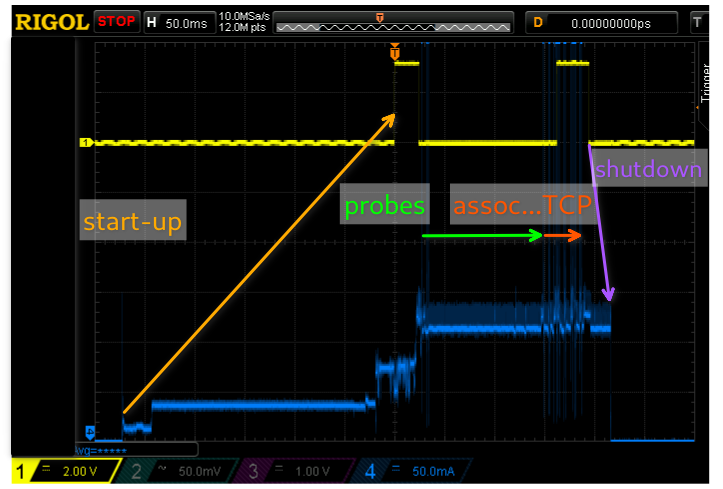 Scope capture of the esp32 waking from deep sleep and making a TCP connection to a server.

There are two things that immediately stand out on this trace. The first is that it takes longer for the esp32 firmware to start-up (~270ms) than it takes for the sketch to fire-up Wifi and do its TCP connection (~200ms)! I asked and was told by @me-no-dev that this is due to the extensive chip/memory verification that occurs at boot time and that I wasn’t missing some magic setting. The impact on total power consumption is definitely noticeable but not quite as bad as it might seem at first because the power consumption is much lower during this start-up period than during the active portion.

The second noticeable aspect of this trace is that probing still takes the majority of the time and includes a long idle period. I have to admit that I just don’t quite understand the intricacies of probing… The overall packet trace is quite sweet and instructive:

This was the probing! It took 121ms if we look at the time of the next packet in the dump below. This matches the scope trace. The actual packets are a little odd: the first is the expected probe request kicking things off, but then comes an ARP request from the server we’re going to contact! This is really the server trying to get a MAC address to send some FIN packets from the previous sketch iteration. What’s odd is that the esp32 answers with an ACK in packet 120. There is no ARP reply, though, which makes sense since it hasn’t really associated with the AP yet. So somehow more than expected of the Wifi stack must be hooked-up even though there is no association, I wonder whether there’s an attack vector buried in here…

Quickly thereafter comes a probe response and ACK. What I don’t understand, again, is why this is followed by a ~110ms pause. It seems to me that the esp32 should not be waiting since it found the AP specified in WiFi.begin(). (I posted a question on the Espressif Esp32 forum, let’s see…)

The next set of packets associate, send gratuitous ARPs, and locate the MAC address of the server. All in all this takes 21ms:

Now the TCP connection can occur:

And it’s a wrap! Other than the pause after the probe response and the two rounds of ARP requests because my linux server is lazy in responding all this looks about as good as one might expect!

Does security run into the same power increase as it does with the esp8266? The following scope trace answers this question: 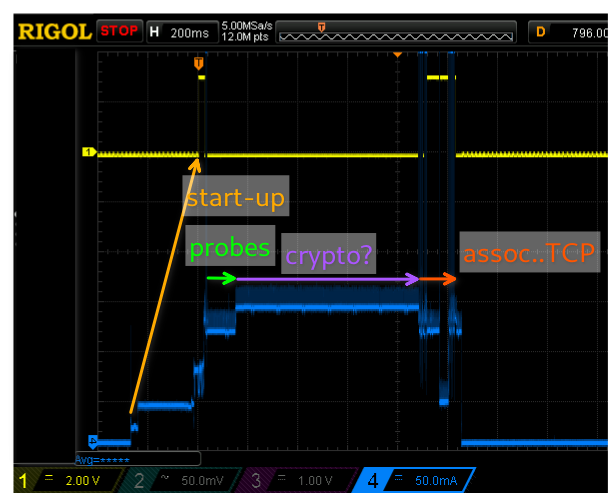 Scope capture of the esp32 waking from deep sleep and making a TCP connection to a server on a secure (WPA2) Wifi network.

Yes, we still have to pay a price when we choose security! (Note the 200ms/div here vs. 50ms/div in the open-AP scope capture further up.) The primary difference with respect to the open access point trace is the approx 700ms period of elevated power consumption between the end of the probes and the association (I verified this with a packet dump). I can only surmise that this is some crypto calculation but I spent quite some time looking through the WPA2-PSK standard and all the crypto key exchange happens way later. Unless there is something that can be pre-computed or perhaps some random number initialization I don’t quite grasp what is going on. I posted another question on the Espressif Esp32 forum, let’s see whether anyone can provide an insight.

The following table and chart show the expected run-times on a 1000mAh battery assuming wake-up intervals from once per hour down to once every 20 seconds. The “open” columns refer to open access points and “secure” to WPA2-PSK. The “act%” columns refer to the percent of total power consumption that comes from the active period (startup+wake).

The assumptions underlying the table and chart are:

The following scope capture adds a purple trace showing the power consumption integral. This shows that the majority of the power is spent when the esp32 is running actively at 125-150mA. The 270ms at start-up don’t add a significant amount to the power consumption, but they do add a potentially problematic delay if the wake-up is caused by some external event (i.e. gpio input) and the esp32 needs to react quickly to it. 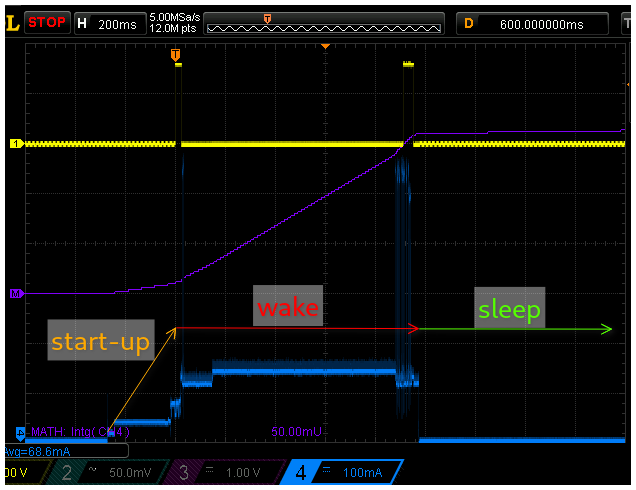 Going back to the original goal of achieving a run-time of a week to a month on a 1000mAh battery the esp32 provides a number of options when using the deep-sleep mode. Specifically, it can wake up every 20 seconds when using an open access point (not really recommended!) and every minute when using a secure access point.

The next post goes a step further and explores what happens if the esp32 makes a TLS connection to an MQTT server and sends & receives some messages.

The esp32 provides an additional explicit light-sleep mode that has not been explored here and that is closely related to deep-sleep. Explicit light-sleep puts the cpu and radio into light-sleep mode for a fixed duration just like deep-sleep does, but it preserves memory content. This allows the periodic wake-up to be implemented without loosing memory state but at the cost of higher power consumption. The Wifi has to be turned off prior to entering light-sleep, so the wake-cycle power is expected to be very similar to the deep-sleep case since most of the power is spent on connecting to Wifi (especially in the secure network case).