In automatic light-sleep mode the esp8266 goes to sleep when there is no activity. From there it can wake-up due to a timer or due to Wifi activity.

Used on its own, light-sleep mode wakes up according to the access point’s DTIM setting, i.e., the period at which beacons contain a map of pending packets. In a recent SDK Espressif added a twist on this that enables the application to specify the period explicitly, in which case the access point’s setting is ignored. This allows the esp8266 to control its wake-up interval instead of being at the mercy of the settings in the access point.

The assumption behind the explicit interval setting is that the access point most likely keeps pending packets around for a while before discarding them. In theory, it only has to keep them for a DTIM period but when the network is congested that’s most likely too short anyway.

The test sketch starts by connecting to the access point and putting the esp8266 into light-sleep mode with an interval of 5 beacons, i.e., 500ms. The loop() then consists of setting a gpio pin to high to trigger the scope, opening a TCP connection to a test server, sending some data, and closing the connection. It then sets the gpio pin to low and calls delay(2000). At that point there’s nothing more for the esp8266 to do so we expect it to go into light sleep mode for 2 seconds, interrupted only by the periodic wake-up every 500ms to catch a beacon.

So long for the theory, the following screen capture shows what happens in practice. This is using an open access point for starters. 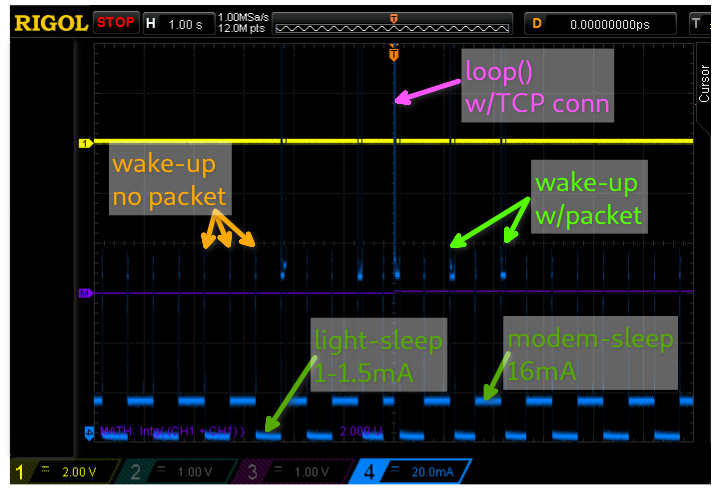 Scope capture of 12 seconds in automatic light sleep mode with a loop() iteration in the middle.

The yellow trace shows the gpio pin which very briefly goes high in the center of the capture (not really visible). Each horizontal division corresponds to one second, the full capture lasts 12 seconds. The blue trace shows power consumption at 20mA per vertical division.

In the blue trace there are power spikes up to about 75mA clearly visible every 500ms. These correspond to the wake-ups where the esp8266 catches a beacon. Some of these spikes last longer (see green arrows) and contain some faint TX power spikes. These correspond to periods where the beacon contains a flag that there’s a packet pending and then the esp8266 asks for the packet to be delivered. In the middle of the trace more transmission activity can be seen, which is when the loop() iteration occurs. It is also noticeable by the fact that it’s offset with respect to the regular 500ms wake-ups.

So far everything looks as expected, but the power consumption when in sleep mode is not as expected! In this particular capture, half the time when the esp8266 powers down after a beacon it goes into light-sleep mode consuming less than 2mA. The the other half of the time it goes into modem-sleep, which consumes about 16mA, ouch! Other captures show a different pattern and sometimes more than half the time is spent in modem-sleep. As we will see, this frequent operation at 16mA really eats into the run-time!

The following screen capture zooms in on the activity in the middle of the previous capture where the loop() iteration and corresponding TCP connection occur. 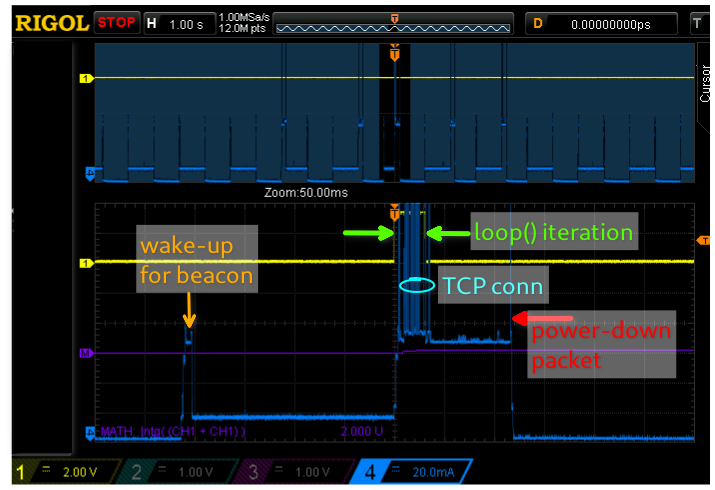 Scope capture of a loop() iteration.

Towards the left the blue power trace shows a wake-up for a beacon. It lasts about 15ms and evidently there was no packet to retrieve. Afterwards the esp8266 goes into modem-sleep until the loop delay expires. As it wakes up the yellow trace shows the loop() iteration lasting roughly 30ms and the blue trace shows a lot of Wifi activity, as we would expect. But when the sketch goes back to sleep, the esp8266 does not power down, instead it lingers in high power mode for about 80ms, transmits a packet and goes to sleep (this time into light-sleep).

Here is another capture, this time zooming in on a beacon where the access point had a packet to deliver to the esp8266:

Scope capture of a beacon with data to be delivered.

Somehow there are three transmissions involved in receiving the pending packet. The best way to understand what is happening is to look at a packet capture:

The first packet is a beacon that presumably contains a flag telling the esp8266 that there is a packet pending. 3ms later the esp8266 requests packet delivery by sending an empty data packet with a header flag set to indicate that it is exiting power save mode, i.e., it is now receiving continuously, which means that the AP can send stored packets and any additional incoming ones at will.

After the Wifi-level ACK of the power-save-end packet the AP sends the data packet, which is an ICMP ping request. Unfortunately the monitoring adapter missed it but one can see the ACK from the esp8266 immeditaely after. Just 2ms later the esp8266 responds with an ICMP reply packet, which gets ACKed. At this point the esp8266 doesn’t know whether the AP has additional packets stored for it, so it has to wait for “some time” to give the AP a chance to transmit them. From the timing column it is evident that 80ms go by until the esp8266 sends another packet (number 132), which is another empty data packet but this time with a power-save start flag telling the AP to buffer up any packets. The last two packets are the ACK for the empty data packet and then some time later the next beacon comes in.

The 80ms of delay are very consistent and can be seen both in this packet capture as well as the scope capture above (the two don’t show the exact same events).

I also looked at the performance when using a secure access point and surprisingly there is no change in behavior to be seen. The TCP packet exchange may be happening a tad slower but when looking at two traces side-by-side it is impossible to distinguish the two.

Putting it all together

From all evidence the esp8266’s automatic light sleep mode operates more or less as expected, but there is at least one bug and one unexpected issue:

A major issue with the lingering is that it is incurred each time some packet arrives, which is not under the control of the esp8266 or its application. In the example above I used an ICMP ping so I could relatively easily capture the activity, but under normal circumstances if nothing wants to talk to the esp8266 there is still a regular cadence of broadcast packets that come through and wake the esp8266 up.

A perhaps extreme test is to ping the esp8266 every second. In that case it never goes to sleep at all, keeping the receiver going at 70mA full-time! What this highlights is that the esp8266 is really at the mercy of the network environment and thus its battery run-time can be compromised by completely unrelated activity.

The following table and chart show the average power consumption and run-time on a 1000mAh battery in a variety of scenarios. The iter period column specifies the rate at which loop() iterations run, the pkts per second specifies the number of beacon-induced wake-up periods there are per second, the ideal columns show the resulting average current and run-time if the esp8266 always properly went to light-sleep and the actual columns show a 50-50 mix of light-sleep and modem-sleep.

The assumed durations and consumption levels are shown in the table on the right.

It is quite clear from the chart above that the light-sleep mode is significantly more power-hungry than the deep-sleep modes explored in a previous blog post. In order to get a run-time of more than a couple of days one has to somehow ensure that there are only very few broadcast packets on the network and achieving run-times longer than a week assume that Espressif will someday fix the light-sleep bugs.

To get a better sense of where the power is going the following table breaks down the % of power consumed in each mode for two of the rows above:

The first row corresponds to contacting a server every 10 seconds and receiving some broadcast packet every 10 seconds as well. The run-time, if light-sleep was operating properly, would be 9.5 days, which meets the “run for at least a week” goal. Given the even distribution of power consumption there is not one thing one could fix to reduce the power significantly. The second row shows the same server-contact rate but a 10x higher broadcast rate. In that operating regime the power consumed by lingering after a packet becomes the single largest power hog.

This concludes the analysis of the esp8266’s sleep modes. It is pretty clear that keeping the esp8266 associated to an access point cannot be done with run-times of more than about a week, unless one uses a sizeable battery. In addition, the actual run-time is difficult to predict and may vary significantly over time because a lot depends on other activity on the Wifi network.

To achieve long run-times one has to use deep-sleep and wake-up only intermittently. In that case the run-time can be predicted with reasonable accuracy, although the time it takes the esp8266 to successfully associate with the AP at each wake-up may vary quite a bit.

My personal conclusion is that trying to use the esp8266 for long-term battery operation is a recipe for headaches, except in very narrow use-cases. The reason is a combination of the fact that it requires the use of deep-sleep, which is painful for anything but trivial applications, and that security requires rather long sleep intervals (not to mention its high memory requirements).

The next post examines whether the Espressif Esp32 is a better choice for low-power wifi operation.