The esp32 can also maintain an association with an access point while going to sleep on its own when it is idle. Is this a good alternative to periodically waking up from deep-sleep?

There are actually several different modes that allow the esp32 to maintain an association and reduce power when it is not active. The modes are described in the API reference and they all take advantage of the Wifi power save mode and DTIM interval (see my earlier post on the topic). To save power, the device tells the access point (AP) that it’s turning its radio off and the AP holds packets destined for the device until it wakes-up again. In addition, the AP includes a flag in its beacons to tell the device whether it has packets pending so the device only neeeds to turn RX on periodically and check the beacon.

The arduino framework automatically supports the “modem sleep” mode where the esp32 turns off the radio but keeps the cpu cores running. I tested this by modifying the MQTT test app so it connects to Wifi and the MQTT server in the setup function and then publishes to a loop-back topic once every few seconds in the loop function.

I ended up using an open access point and unencrypted MQTT connection so I could analyze the packets more easily. (I did later test using a secure AP and MQTT over TLS and the observed behavior is almost indistinguishable.) A tcpdump running on the MQTT server showed the following for a loop iteration:

Just 3 packets, that’s pretty impressive! The first packet contains the publish request (using MQTT QoS 0), the server turns around and sends the message back on the pre-existing subscription 230 microseconds later and piggy-backs the TCP ACK on the same packet. Finally the esp32 ACKs the server’s packet at the TCP level. This is as minimal as one could wish for! 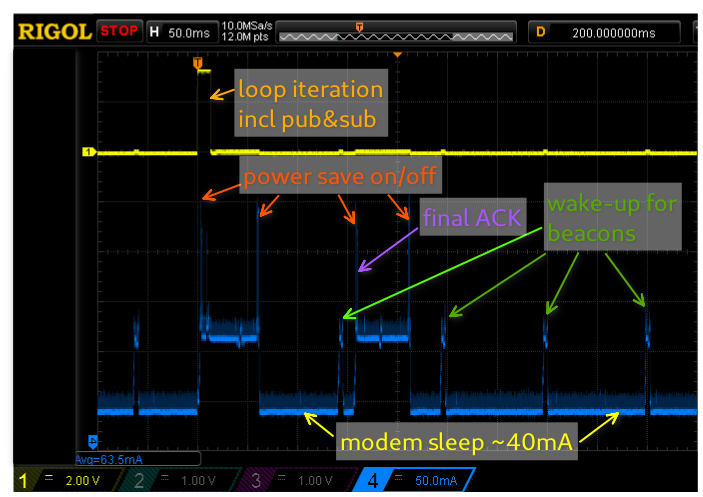 The yellow trace is high from the start to the end of the loop function. That takes under 15ms and includes publishing a message and then waiting for it to come back on a subscription to the same topic. Rather impressive, to be honest!

The blue trace shows the power consumption at a resolution of 50mA per vertical division. One can easily make out the modem sleep power level around 40mA, the radio RX power level around 115mA, and the short transmit spikes. The RX power spikes to 1125mA every 100ms are clearly visible where the esp32 captures the AP’s beacon to see whether it has a packet pending.

The shape of the active period around the loop iteration should look familiar from the equivalent esp8266 scope captures: the esp32 powers the radio up, transmits a “exiting power-save mode” packet, then transmits and receives data packets, and finally lingers for some time to give the AP an opportunity to send additional packets. Eventually the esp32 transmits a “entering power-save mode” packet and turns the radio off.

In the esp8266 the time spent lingering was around 80ms, in the esp32 this got shortened to 50ms, which is better in the many cases where there are no packets. I wish it was smarter and cut that time down more. For example, it could determine whether the AP is idle by monitoring the radio and, when that is the case, conclude early on that the AP must not have any queued packet.

The odd feature of this scope capture is the fact that there are two long high-power periods spaced only 150ms apart. The loop function iterations are several seconds apart, so that’s not the cause. The second of the two periods in this scope capture does not start at a beacon interval thus it must be caused by something other than the AP having some packet pending. The answer is seen in the tcpdump above: the TCP stack on the esp32 delays the final ACK by about 100ms, i.e., longer than the lingering time and this causes a second wake-up period. Delaying ACKs is a common TCP optimization that reduces the number of packets transmitted. It works well on the server end where delaying the ACK allowed it to be piggy-backed on the response data packet but it back-fires in the case of the ACK from the esp32 and doubles the power-cost of the whole exchange.

Unfortunately it is not easily possible to disable the ACK delay. It is possible to disable the TCP Nagle algorithm by calling WiFiClient.setNoDelay but that does not affect delayed ACKs. Looking at the LwIP code, a TCP_QUICKACK socket option is not implemented and in fact there is no configuration setting to affect ACK delay: the code to send the ack when receiving data on a connection is here and would need to be changed to tcp_ack_now(pcb).

Overall all this is interesting to understand the timing behavior of the esp32 but from a power point of view the minimum consumption of 40mA at modem-sleep level is not what I’m looking for. The next post turns on automatic power saving with dynamic frequency scaling.