Dynamic frequency scaling allows the esp32 to go into light-sleep mode when it is idle.

In the ESP IDF framework dynamic frequency scaling with light-sleep is enabled by turning on power management (a compile-time option) and then calling a few functions as described in this documentation. Unfortunately the arduino framework does not currently support enabling the power management because its interaction with peripheral clocks is non-trivial.

To evaluate the potential of the frequency scaling and light sleep I started with the power_save ESP IDF example app. At first I had difficulties getting it to work, which resulted in a ticket and a quick patch. This made the example app work on my Wifi network.

I then modified the example app slightly and set the listen interval to 9, i.e., wake up every 900ms to check the beacon. The app just connects to Wifi and then does nothing, which is not terribly representative, so I generated some Wifi activity by running a ping to the esp32 with an interval of 6 seconds. A snippet of the ping output is:

The response time varies as expected from anywhere between a couple of milliseconds up to almost 900ms, which is the interval at which the esp32 wakes up.

A scope capture of the power consumption looks as follows: 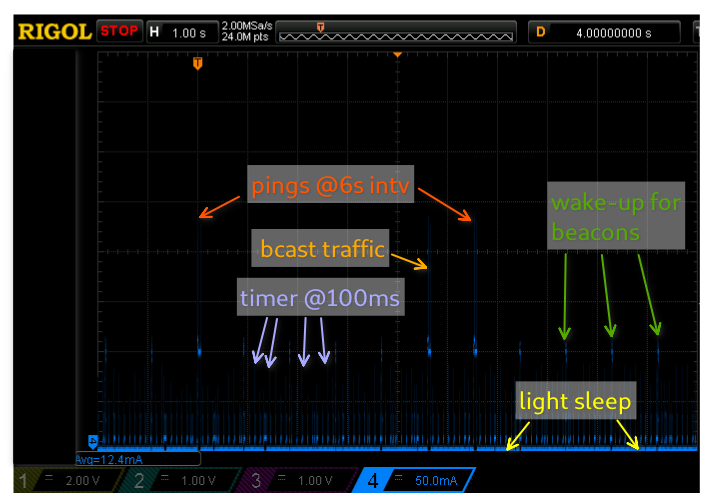 Esp32 in automatic light sleep with a listen interval of 900ms and being pinged every 6 seconds.

The capture uses a 1 second per horizontal division and thus shows 12 seconds total. Two pings can be discerned from the TX power spikes that are 6s apart. An additional power spike must be due to some broadcast traffic on the network that the esp32 picks up. The wake-up every 900ms to listen to the beacon can also be seen and finally the most frequent power level is very close to zero in light sleep.

The following zoomed scope capture magnifies the period where some broadcast traffic and a ping are received. One can now see the familiar pattern where the esp32 wakes up, transmits a power-save-off packet, receives packets from the AP, potentially responds (in the case of the ping), then lingers for 50ms and finally sends a power-save-on packet before dropping to sleep.

The capture also shows some timer activity every 100ms and the light-sleep power save level. Not really discernible in this capture is the fact that the light-sleep consumption is about 1.1mA. 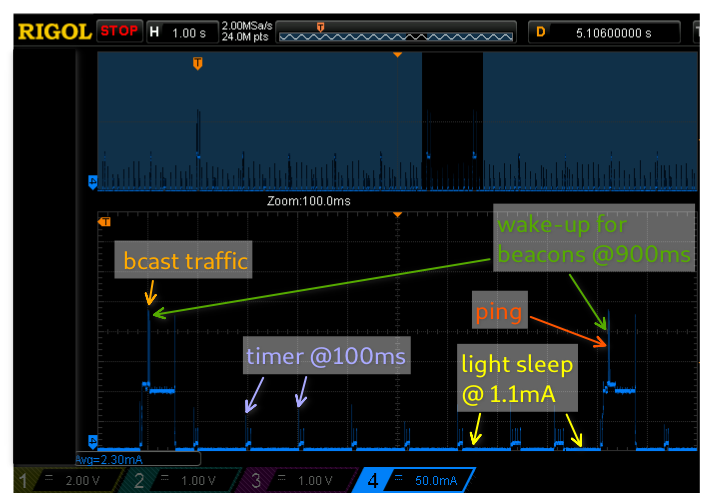 It is quite clear that the power consumption is primarily related to how frequently the esp32 wakes-up. I don’t understand why Espressif doesn’t:

Obviously tweaking these settings has an effect on how responsive the esp32 is to network traffic and requests, but surely the app designer knows better what is appropriate in a given setting.

The next post pushes the limits of automatic light sleep and calculates run-times.