Periodically waking up from deep sleep and sending a short TCP message is interesting, but how does the esp32 perform in a real scenario where it communicates with an MQTT server?

The previous posts cover the startup-time to connect to Wifi so this is really an extension of those tests. To make it fully real, the connection to the MQTT server doesn’t just use a bare TCP connection but additionally encrypts it using TLS. So this is a full-on real scenario!

The only aspect that may not be accurate in some use-cases is that the MQTT server is located on the local network and not somewhere across the internet. The latter case obviously adds latency and thus will keep the esp32 awake longer. How much longer depends on the local internet connection, the distance to the server, and the server load.

I had not set-up TLS for my local MQTT server, which runs mosquitto, so I took advantage of that to skip public key crypto and go straight to the PSK key cipher suites, which are new to me.

Openssl output for TLS PSK connection from esp32 PSK stands for pre-shared key and means that the client and server share a key. This replaces all the certs and private keys. In addition to the PSK, the client also has a string ID, and the entire set-up is not more involved than assigning each client an ID and a randomly generated key. Practically the same as assigning each client a name/password combo, but more powerful and secure.

As a test I use a simple app that connects to Wifi, connects to the mqtt server, subscribes to a topic, then publishes a short message to that topic and finally waits for the message to come back on the subscription. This simulates a use-case where the esp32 periodically wakes up, takes a measurement and sends it to the MQTT server, but also subscribes to a topic so it can be sent commands to make changes or perhaps to stay awake and accept interactive commands for a period of time.

A scope capture of this process looks as follows: 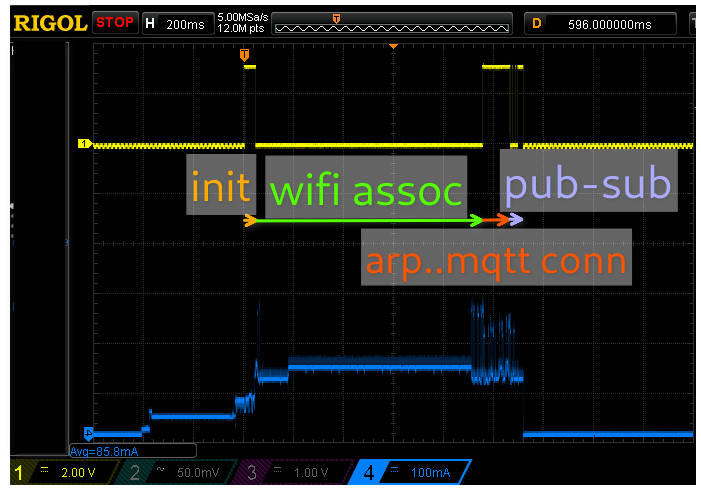 Scope capture of the esp32 waking from deep sleep and doing pub-sub with an MQTT server over TLS.

Here is becomes obvious that Wifi is fast: the added time compared to the simplest TCP connection is at most 100ms, i.e. less than 10% of the total. So as long as the server is fast at responding it doesn’t really matter what the esp32 does once it has gone through all the trouble of associating with the access point. (I should caution that using public key crypto may take longer, I didn’t try.)

The next post takes a look at my quest for a low-power esp32 board.