With a few more hacks the esp32 light-sleep power consumption can be pushed to the limit. This post explores the limit and calculates light-sleep mode run-times.

The previous post uncovered a number of problems with the automatic light sleep mode. In addition, the Arduino framework does not officially support the esp32’s automatic power management, and hence I used a trivial app to measure just the basic behavior. In order to push the envelope I hacked ESP-IDF as well as the arduino framework. I configured ESP-IDF to include the arduino framework as a “component”. The steps for that are best outlined in this reply to a ticket.

Using this method it is possible to make a number of fixes to push the envelope and measure real application-level communication – an encrypted MQTT exchange in my case. The specific changes are:

The specific settings I experimented with are:

The final code is available on github.

Another setting that could be tweaked is to disable the periodic sending of gratuitous ARPs by LwIP, but because it only happens once a minute I’m not convinced it makes a real difference here. The setting I really wanted to change as well is the Wifi RX lingering period before re-entering power-save mode, but it appears to be buried in the Wifi binary blob.

After making these changes I took a fair number of measurements and had some difficulties interpreting them because the loop iterations are not always successful. I was using my general home wifi and it appeared as if the esp32 had difficulties maintaining the association. I switched to a test AP (on the same LAN) and the association appeared more stable. I suspect that a listen interval of 5 seconds is too long but I left it as-is in order to get a “very best case” number. For a real deployment one most likely has to tweak this setting to find a happy medium. 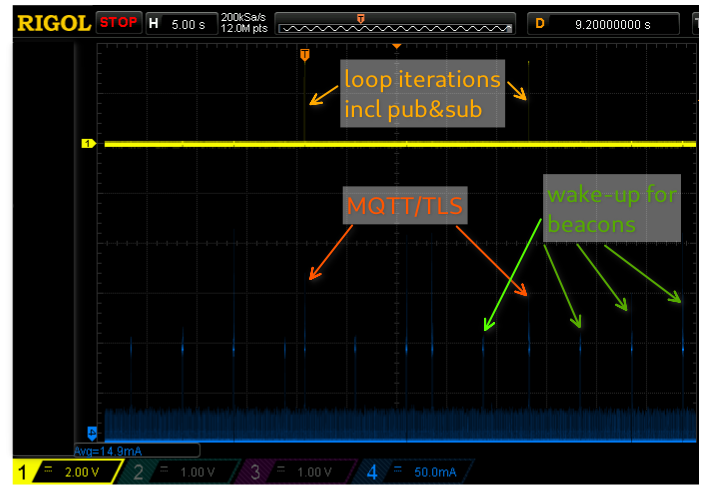 Scope capture showing the esp32 automatic light sleep over a period of 60 seconds with two wake-ups to exchange MQTT packets over TLS and several additional wake-ups to pick-up broadcast packets. The average power consumption is approx 3.8mA and not 14.9mA as incorrectly averaged by the scope.

The scope capture above shows the general behavior with two loop iterations just barely visible in the yellow trace. The corresponding MQTT exchanges can be seen in the blue trace that captures the power consumption. The Wifi wake-ups every 5 seconds are clearly visible and a number of them result in the transmitter powering up to pick-up a packet that is pending at the AP. Unfortunately the average power consumption displayed by the scope is inaccurate due to the degree of averaging being performed in this capture of 60 second duration.

All the models assume:

The next post compares the low-power performance of the esp32 with the esp8266.